Agnieszka Kozlowska’s practice stems from experiments in the medium of photography centered at the moment of photographic exposure, when a tangible link is formed between the light-sensitive surface and the physical world.

She is fascinated by the notion of a photograph as a physical trace, a unique object affected by rays of light reflected off the scene in front of the lens. As such a material entity, she argues, a photograph can signify other than purely as an image and can begin to represent that which she feel cannot be adequately communicated through conventional photographic techniques, for example the bodily perception of the environment that goes far beyond the visual.

“My practice stems from experiments in the medium of photography and is driven by a fascination with the moment of photographic exposure, when a tangible link is formed between the light-sensitive surface and the physical world. Constructing primitive cameras, using historical photographic processes and making paper, I explore the status of a photograph as a physical trace rather than purely an image.

In my recently completed practice-led PhD I propose photography is a natural phenomenon that takes place essentially independently of human intervention, as a tool for representing what some cultural geographers have termed the more-than-human, sensuous dimensions of our interaction with the surrounding world.”

For the b-side Festival she has created photographic objects entirely out of the coastal landscape: building cameras in the rock formations, making paper out of plants, and exposing it to the view of the sea and the sky. 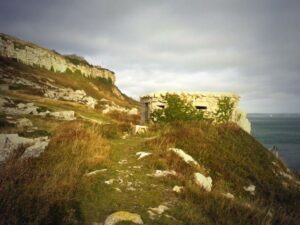 A walk from Church Ope to East Weares

Re-presencing the island: photographs from and out of Portland I