A site-specific audio walk made for Portland by artist Katrina Palmer.

Portland has been shaped and hollowed out over centuries by convicts and quarrymen to provide stone for some of London’s best-known buildings, one million square feet of Portland stone is said to have been quarried for St Paul’s Cathedral alone. Artist Katrina Palmer has undertaken her own excavations into this elemental island, marked by unsettling absences, deviant goings-on and a writer who has gone missing.

Katrina has created a series of narratives set on Portland for radio listeners, readers and walkers: The Quarryman’s Daughters, is a 30-minute broadcast on BBC Radio 4; The Loss Adjusters, a site-specific audio walk on Portland; and a newly published book, End Matter.

The walk took visitors from 52 Easton Street, previously a loss adjusters' premises on Portland, out past a cemetery then on to a quarry listening to an unfolding story of the primal forces of the island's geology, a young offender turned gravedigger, and the Horrocks sisters, two daughters of a quarryman.

Listen to The Loss Adjusters HERE

Commissioned by Artangel and BBC Radio 4.

The Loss Adjusters is presented on Portland by Artangel in association with b-side. 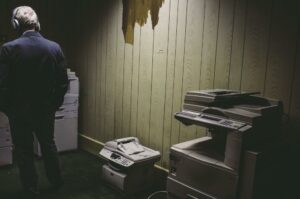 Listen to The Loss Adjustors here