Ray Lee is an artist, composer, and performer. His work investigates his fascination with the hidden world of electro-magnetic radiation and in particular how sound can be used as evidence of invisible phenomena. He is interested in the way that science and philosophy represent the universe, and his work questions the orthodoxies that emerge, and submerge, according to the currently fashionable trends. He creates spinning, whirling, and pendulous sound installations and performances that explore “circles of ether,” the invisible forces that surround us.

Ray Lee will be presenting 'Chorus' at b-side festival 2016. 'Chorus' is an uplifting and mesmerising installation made up of giant kinetic sculptures that emit hypnotic sounds. Beautiful orbits of light will be traced in the sky as large metalic arms whirl above you. At the end of each metalic arm loudspeakers will emit precisely tuned musical pitches creating a pulsating, harmonic drone, singing out a hypnotic siren call to all those present. This large sound installation is co-presented by both b-side (b-side festival) and Activate (Inside Out Dorset Festival). 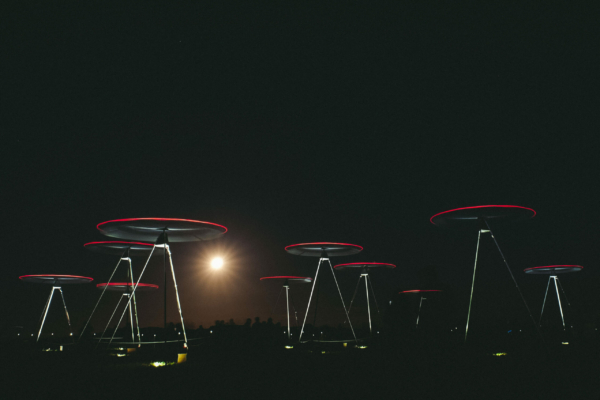 Chorus is an uplifting and mesmerising installation made up of giant kinetic sculptures that emit hypnotic...