As an artist I work mainly with sound. I explore the way that sound behaves in different resonant spaces. This has been a theme in my work in recent years and I’m aiming to install my sound piece, Sonic Anomaly Sideshow, in a subterranean venue on Portland.

What grabbed me when I first heard about Portland were the strange rumours about the place and the stories of deserted military complexes and bunkers that are supposed to exist on the island. As I visited and started to get to know the place, I realised that the ‘facts’ that I uncovered about this lovely island were every bit as strange as the rumours (if not more so) and the line that divided fact from fiction was in many places blurred or even non existent.

For this commission I have been raiding military sound archives and collecting stories and rumours of what was going on with the military on Portland around 50 or 60 years ago. This will provide much of the sound content for my piece. The military theme is also reflected in the speakers and sound mirror technology I’m using to reproduce the sound. Sound mirrors were the precursor of radar and the originals can be seen along the coast in Kent, the ones that I will use have been made by long term collaborator sculptor Rob Olins. The directional speakers that I use were developed for ship to ship communication and for this new work I will also be using radio and sub bass both of which are, and have been, used by the armed forces for many years. The radio installations will be a collaborative work made with another long term collaborator Stephen Shiell.

My installations use sounds that relate back in some way to the place in which I am working and I’ve developed a number of space orientated works over many years. These have been shown at diverse venues around the world and there is a short film about me by the BBC. 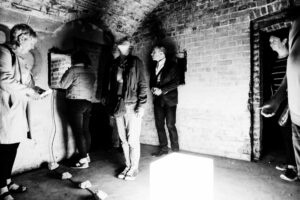 Portland’s geological structure makes it a natural fortress - a quality exploited over the years...