Duncan Whitley is a visual artist and filmmaker who works predominantly with sound and the moving-image.

kimberlin (n.) 1. Portland dialect for a person living on the Isle of Portland who does not descend from a lineage of at least two generations of Portlanders. 2. Portland dialect for a person from Weymouth, or by extension, a stranger, outsider or foreigner. [Middle English cǒmeling n. From Old Germanic comling & (early) komeling, kimeling. Non-native, foreigner] / k’ɪmbəlɪn /

Kimberlin is a short film about the discovery of an underground cinema cavern on the Isle of Portland in Dorset. The uncanny discovery and subsequent breaking news begin to generate speculation amongst islanders as to who created the cavern and the cannisters of super-8mm film found within it. Kimberlin was filmed exclusively on Portland and features a specially commissioned soundtrack by acclaimed composer Abul Mogard. The film has screened at Aesthetica Film Festival, Whitworth Gallery and Cafe OTO, and now will premiere on Portland as a new version of the film which Duncan has edited specially for b-side Festival 2022.

It appears we are under siege! On Portland the sea encroaches, landslips erode the island’s cliffs slowly but surely. Inland, the quarries that scar the landscape eventually grow over, interring dialect and song. The super-8mm films found in canisters inside the cinema cavern also bear scars: scratches and burns in the emulsion surface, in which are recorded images of Portland’s landscape and fauna.

Field recordings of fog horns and the trilling of songbirds pass through the filters of Abul’s synthesiser, emerging as faint memories of place: echoes of in the digital future of an England now difficult to grasp. Where “quarry bells no longer ring, except in old men’s dreams”. 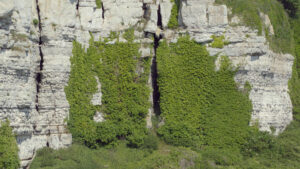