“My work is mostly street based, I like to find opportunities for a bit of anonymous wit. I’m not a fan of elitism, which I think art often is, and I think it’s sometimes most successful when you see something interesting, unexpected, and you don’t notice that it’s art.

My background is in public art, and I have taken part in several performance pieces. In one I took a mobile ‘park’ (a flat-bed trolley planted with trees, flowers, a lawn, birdsong and a park bench) into a shopping mall where shoppers were invited to sit and have lunch. I have also appeared as a museum curator, collecting donations of unwanted things from shopper’s pockets, and curating them and their stories into a special museum (resembling a wardrobe) which we then did guided tours of.

I also make models of wire and papier mache, or plasticene, usually to illustrate a hilarious pun I have just thought of. I will go a long way for a pun.”

Deborah is researching and filming native rays (also known as skate) once common in the seas around Portland, now critically endangered. The plan is to project this film onto the windows of a house, so it appears to be filled with seawater, wherein a slow-mo balletic ray performs her ghostly dance. 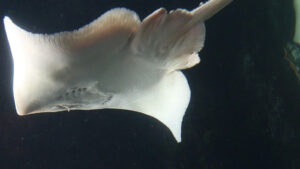 Inspired by a photo taken on Portland in 1925 of two fishermen and their impressive...