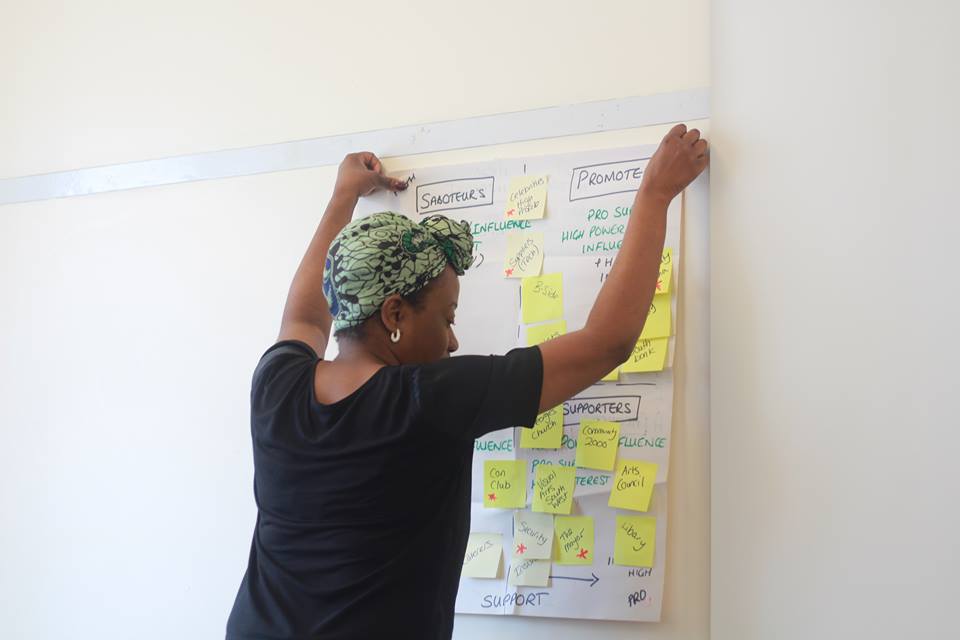 With a looming deadline and a member of the team resourcefully balanced in a kitchen roll holder, the [intransit] producers met again for their fifth session on 21st April, joined by Kemi Bamidele from Creative Training Hub.

Throughout the session we focused on our title of ‘project management’, taken through the life cycle of our ‘WHY? Festival’ from aspirations through to implementation and evaluation. As we compared our progress and our vision against a feasibility study and checklist, it allowed us to focus our attention on the things that we had overlooked, along with the reoccurring themes that were most important to us in our management as a group, such as how we were going to measure our impact after the festival itself.

Along with this we explored the world of our influencers, identifying each of the people and organisations that we had encountered so far and clarifying whether they had the possibility of being either positive (such as promoters and supporters), or even negative (saboteurs and hecklers), as we began to continue our journey into implementation.

Armed with post it notes and an array of coloured pens, each possibility of risk and each step that we needed to take to have the impact that each of us wanted materialised ready for us to take forward into the next session. From faulty equipment to politics, we had everything we could encounter under as much control as we could grasp, and somehow though we were all now much more aware of some of the difficulties ahead our final aim seemed much closer, even though for many of us the idea that our festival was at our fingertips still hadn’t quite sunk in. With the guidance of Kemi, the ideas we had discussed throughout the last four sessions began to settle and we were on our way to trying to make a difference.

Though we have a long way to go, our aim seems simple on the surface: to allow young people to learn and take autonomy over their rights and to celebrate youth voice. And it’s closer now than ever.