Michael Goldberg travels from Sydney, Australia to participate in b-side festival. His project, A Ticket of Leave, represents a reverse journey in a way. It echoes the passage of a number of convicts in the 1800s who, after labouring in Portland’s quarries, were transported to the Antipodes and granted good behaviour ‘tickets of leave’ that assured their freedom if they became responsible members of Australian society. Much of the limestone quarried by convicts on Portland was used in the construction and repair of London’s fine public architecture, and similarly most of Sydney’s civic buildings contain blocks quarried by British convicts in the sandstone quarries of Australia. So there exists a certain poetic reciprocity between the two places.

Visitors to the festival will find, if they look carefully, mysterious sandstone ‘postcards’ brought by Michael from Sydney and secreted in a number of spots around Portland. Each of these postcards will be inscribed with the geographic coordinates of a site in Sydney, Australia, whose colonial history resonates with the location in Portland that Michael will visit. Festival goers can use their smartphones and Google maps to find these Sydney sites. A QR code set into the sandstone when scanned will also take viewers to a website with further details about each place in Sydney. In a reciprocal gesture during the festival, he will carve a second series of postcards out of Portland limestone particular to the historic places he visits as he travels around the island in his motorhome. This second series will comprise poetic responses in the manner of quick postcards to home.

“I am an artist, curator and academic born in South Africa and living in Sydney since 1988. My early solo and curatorial projects in Australia examined the country’s colonial era with site-responsive installations made for key heritage sites. The projects offered alternative views of history and challenged conventional museum interpretations of Australia’s past. The complexities of geopolitics are also of prime interest to me and a number of my projects have addressed the collective unease of the post 9-11 era. A Ticket of Leave gives me a unique opportunity to further explore the historical links between the UK and Australia and to experience and express my responses to this beautiful and multifaceted Portland setting.”

Catch up with Michael’s progress and day to day updates during the festival here  www.michaelgoldbergblog.wordpress.com

This project has been assisted by the Australia Council, the Australian Commonwealth government’s arts funding body. 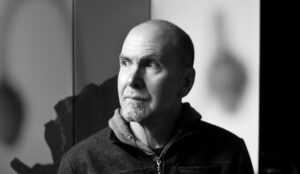 A roving, mobile performance that will be touring Portland daily. Michael will be at these...

'Ticket of Leave' is a roving, mobile performance that will be touring Portland daily. Meet...

Michael Goldberg's mobile studio will be parked up in the area near Portland Castle, find...

An opportunity to meet artist Michael Goldberg and find out more about his transglobal project.

Find Michael and his mobile studio parked up near the High Angle Battery and find...

A Ticket of Leave - National Coastwatch

'Ticket of Leave' is a roving, mobile performance that will be touring Portland daily.